Our large greenhouse is just over a year old and we’re wrapping up the second crop we’ve grown in smart pots, troughs, and fabric long beds. There are plenty of insects that are attracted to the warm interior, so we also get a lot of spiders. East Tennessee has black widow spiders and our greenhouse is turning out to be a good environment for them. They really seem to take well to the gaps between the smart pots we use to grow most of our vegetables and our hemp. I always wear gloves, and look twice before I reach in to pick up a pot, adjust a drip line, clip leaves or cuttings, or do just about anything amongst the plants. 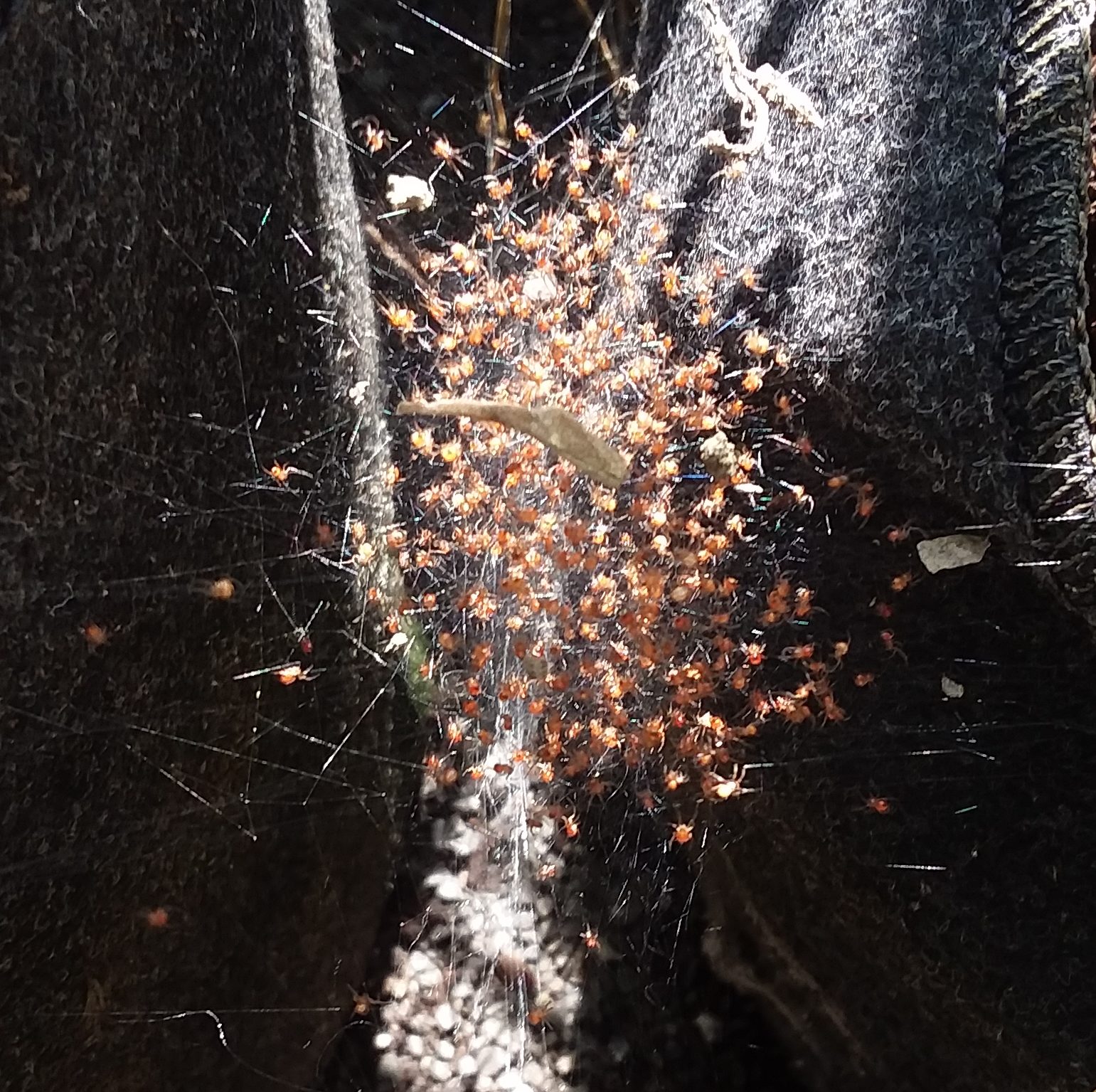 100 [at least] tiny black widow spiders that I spotted in a web in our greenhouse. The random structure of the web is indicative of a black widow, and I spotted her once I moved one of the pots out of the way.

A Web Full of Baby Spiders

We’ve been cleaning out the last of the summer plants in the greenhouse so we’re on the lookout for suspicious-looking webs, nests, hives, etc. This web full of baby spiders caught my eye, so I figured I would take some pictures and try to clean up a little.

This web was between three five gallon Smart Pots and when I moved one, I got a really good view of these little arachnids.

We don’t use insecticides or herbicides so I’ll have to research methods for getting rid of these guys and keeping them out. For now, I use a broom. 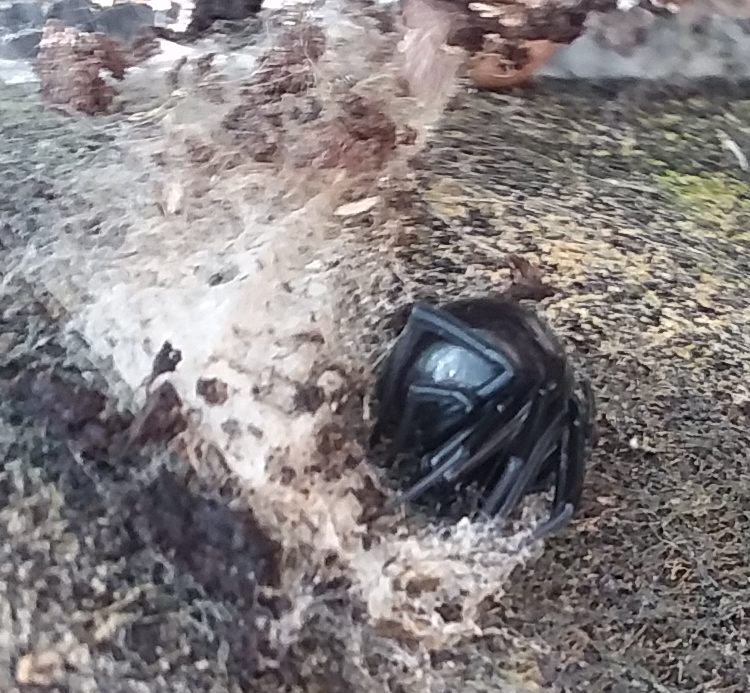 I spotted this black widow’s web because there were about 100 little spiders all clustered together between some smart pots in the greenhouse. I pulled one of the pots out and saw her curled up next to an egg sack.

Mother Spider in Her Nest

Mother spider was curled up in a nest with a couple more egg sacks. I used a small bamboo stick to pull her nest off the fabric pot and set it on the ground.

Mother Spider With Another Egg Sack

I used my bamboo stick to tear the nest apart and I found another egg sack. I was a little surprised that, after all of the damage I was doing to her web, she was still curled up in her nest and not moving at all. 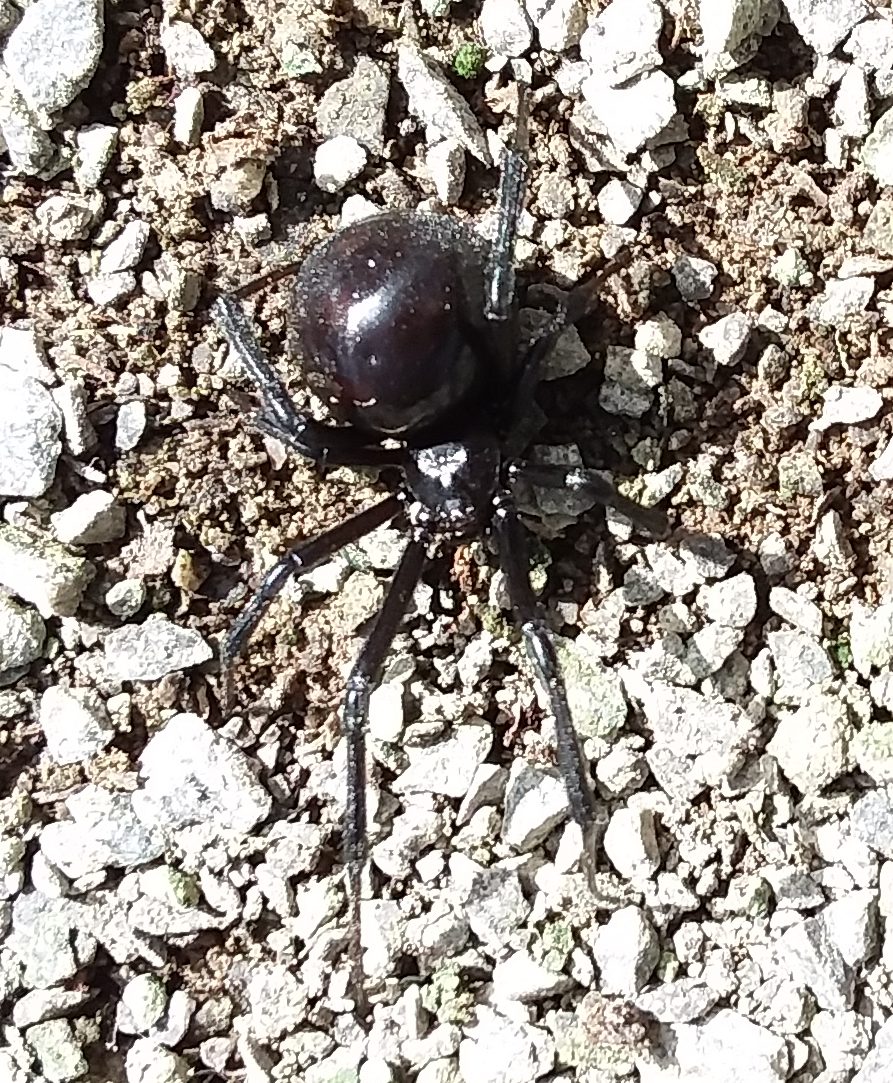 This is the black widow spider I pulled from its web -with a stick- in our greenhouse.

I prodded the nest a few more times with my stick and Mother Spider woke up and started to move around on the ground in the greenhouse. She held still for a few seconds so I could get this nice picture of her. 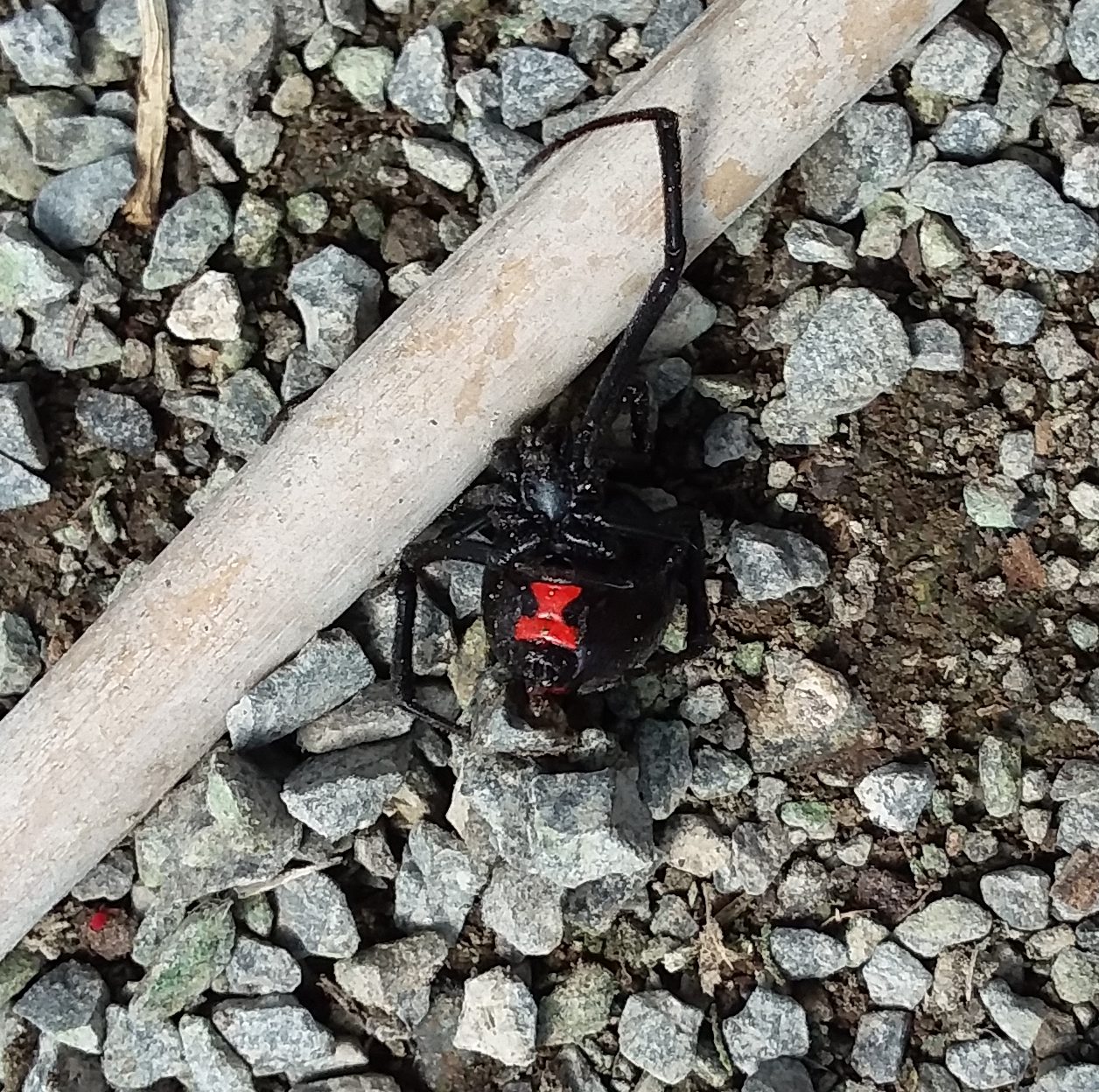 I flipped this black widow over on her back to take a picture of her red hourglass marking.

This red hourglass marking is how you KNOW that you’re looking at a black widow spider. The spider is very black and the red hourglass stands out enough that you can spot these spiders from a pretty good distance. 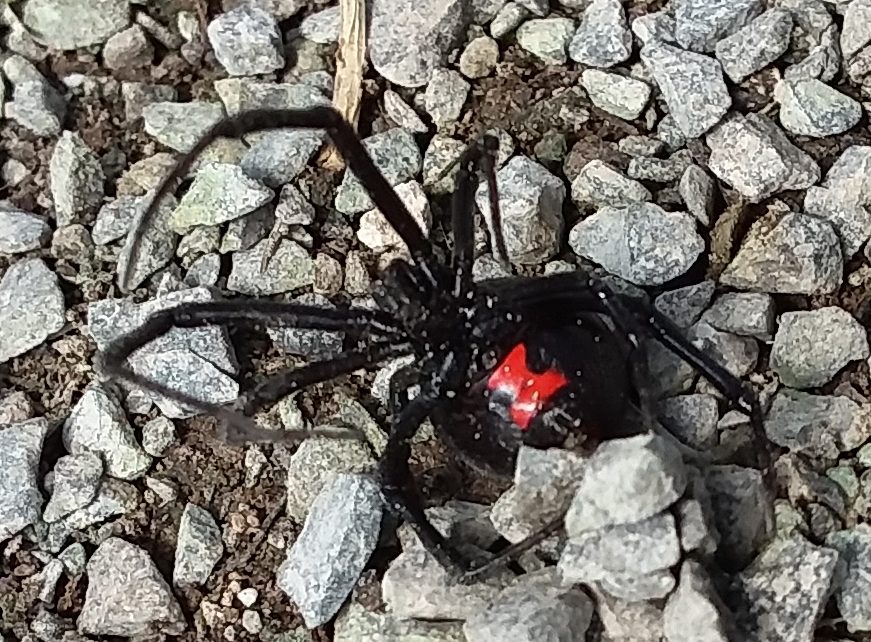 I flipped this black widow spider over as she walked along the ground in our greenhouse. You can see the red hourglass marking that indicates a black widow. I can usually identify them just as easily by giving them a quick glance- they are pure black in color, like no other spider I have seen.

Another View of the Red Hourglass

I moved my stick and the spider just stayed on her back long enough for me to take another picture. 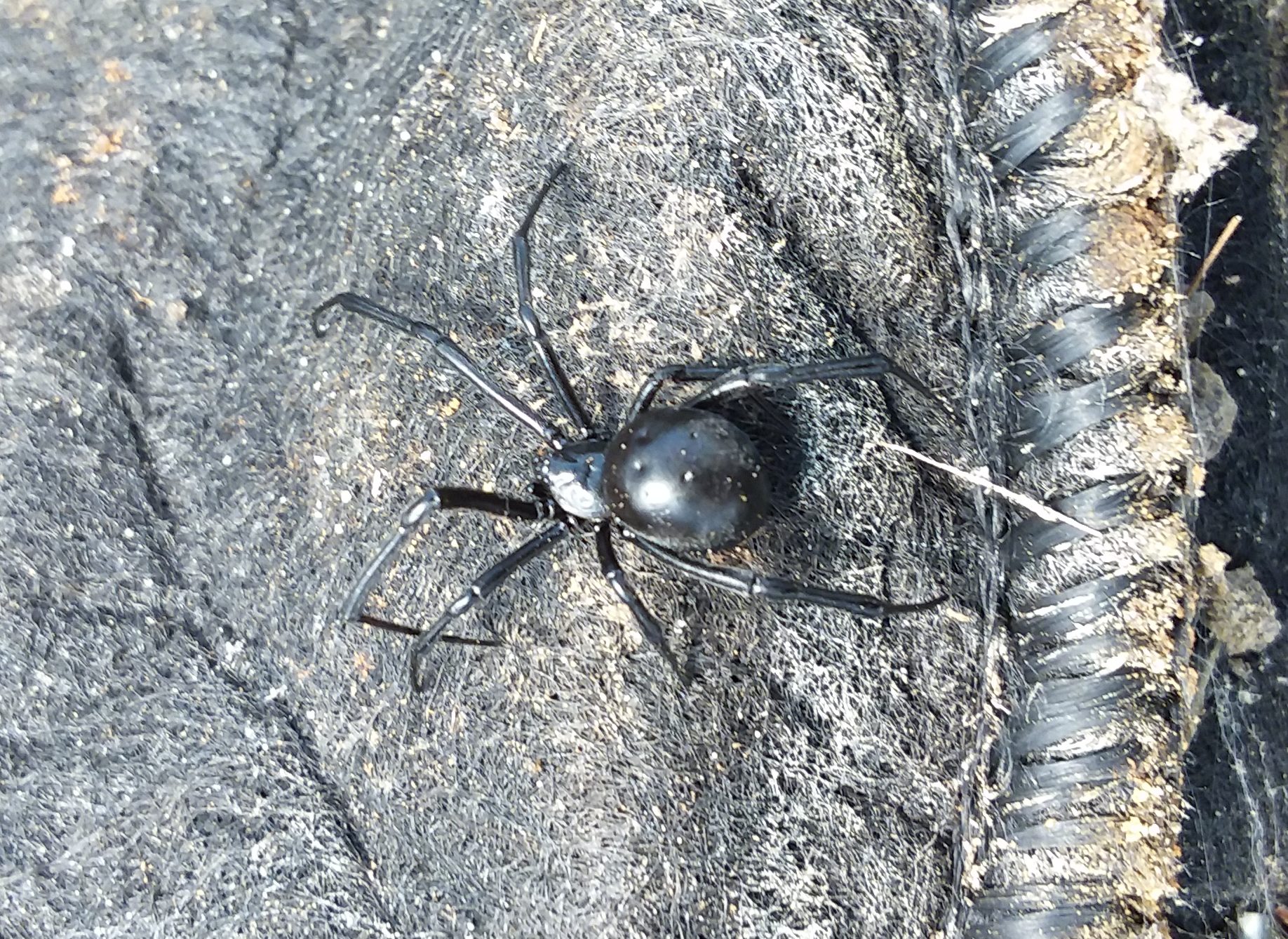 Here is another black widow that I found last week. 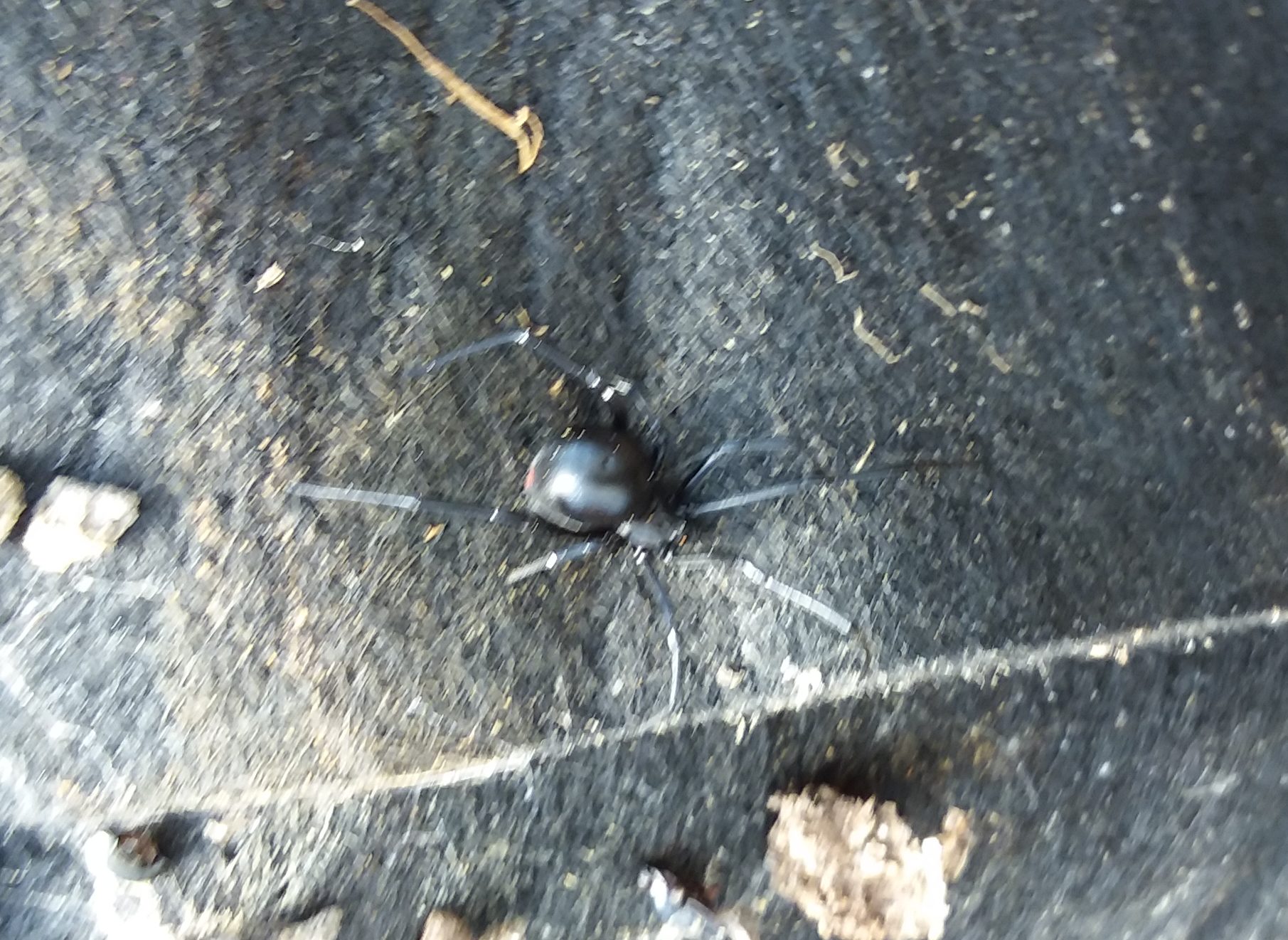 We seem to have quite a few of these Black Widow spiders this year. We have always found them in the gardens or among rock piles in the yard, but they seem to be all over the place this year.

This is the second black widow that I found last week. I moved a lot of pots so it’s no surprised that I found a couple of them.

I wonder how many I missed?