We recently spent a day at the Barefoot Farmer’s (Jeff Poppen) Long Hungry Creek Farm, learning some basics of biodynamic farming. Jeff has some of the best soil I’ve seen in Tennessee; there’s a lot of biomass, any clumps you find can easily be broken up by hand, and it is nice and lose with lots of oxygen at pretty deep levels. Jeff recommended using a disc harrow and subsoiler to condition the soil, along with generous amounts of compost and biodynamic amendments. I digress…

We have been using a 5′ tiller on our 38 HP kubota tractor for the past couple of years. We’ll use our subsoiler and our potato plow occasionally, but the gardens only get tilled to a depth of about 8″, and it’s like concrete underneath. We decided we needed to get a disc harrow.

Fortunately, the Tyler Brothers Farm Equipment Co. of Maryville, TN was getting ready for their semi-annual equipment auction (August 17th) so we decided to go and see if we could get a disc harrow at a good price. 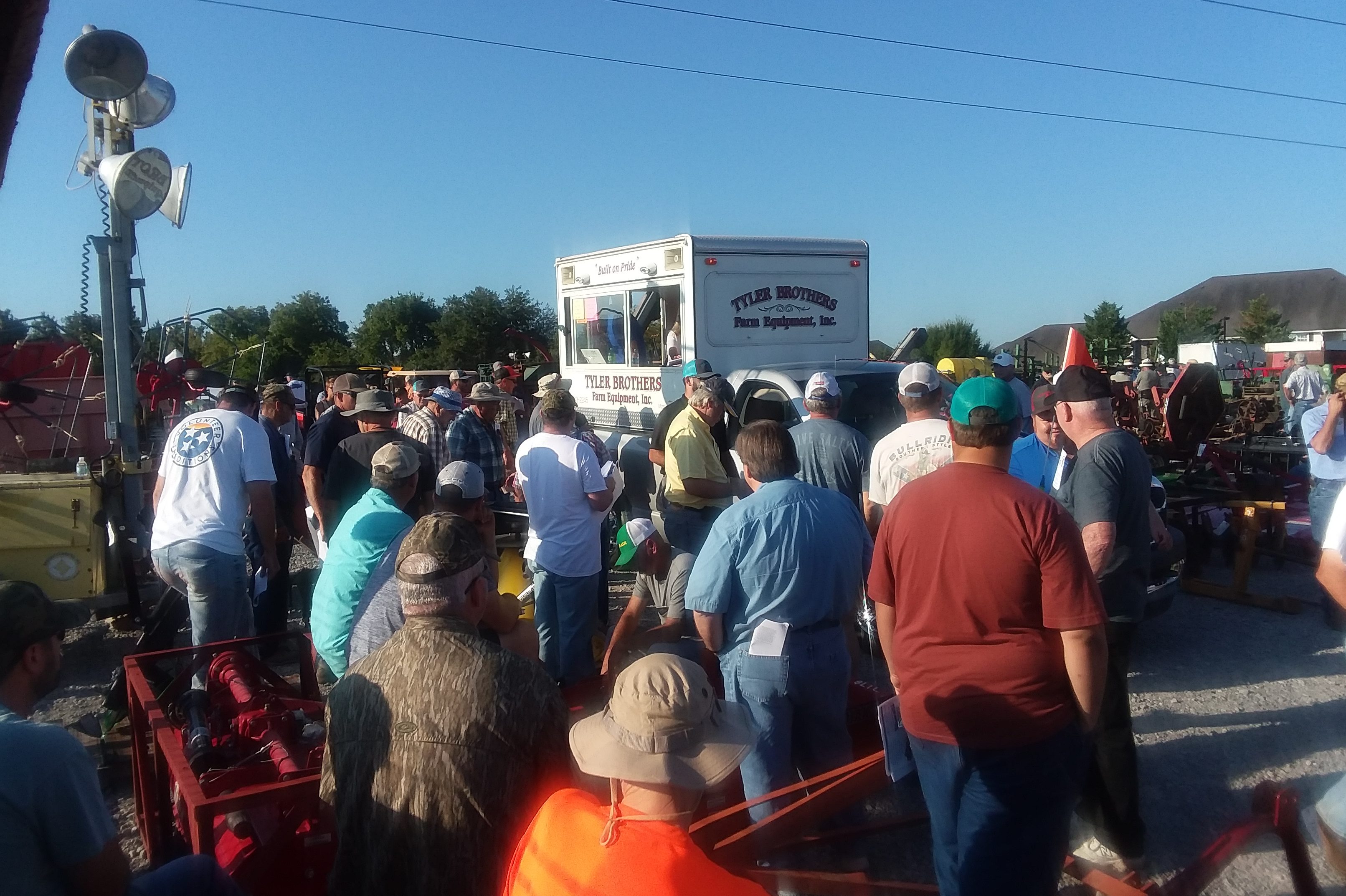 Two auctioneers travel around the 4 acre lot filled with new and used farm equipment, followed by hundreds of bidders.

The auction started right at 8:00 AM Saturday morning. I had to park about 1/4 mile away because so many people go to this auction. The Maryville police put up warning and “Your Speed Is…” signs along the highway because there are so many pedestrians and school busses (dropping off people who park at the local mall).

By the time I got my number and went out to the lot to look for equipment, the auction had already started. That’s OK, because it usually goes well into the evening, and the equipment is not in much of a particular order.

I walked around for about half an hour and located about 5 disc harrows that I was interested in; two were new and three were pretty old (but good) looking. 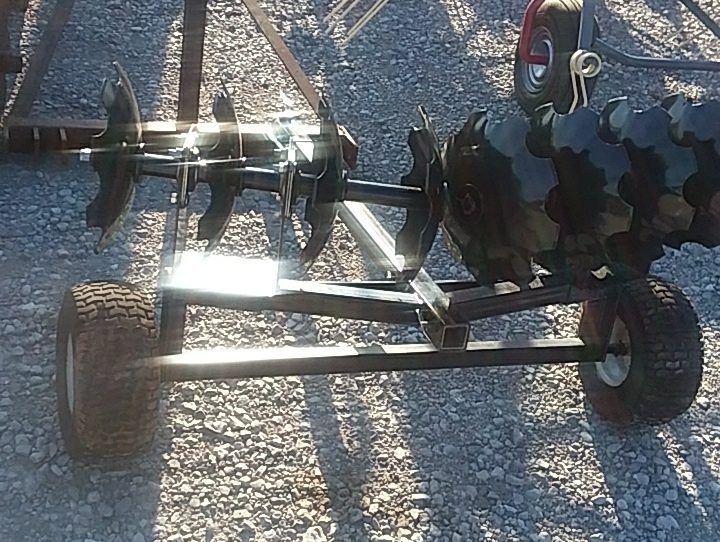 This light-weight ATV-pulled disc harrow is really nice for a small garden and “workable” soil. I really like it for its convenience, but it’s not strong enough for what we needed it for. 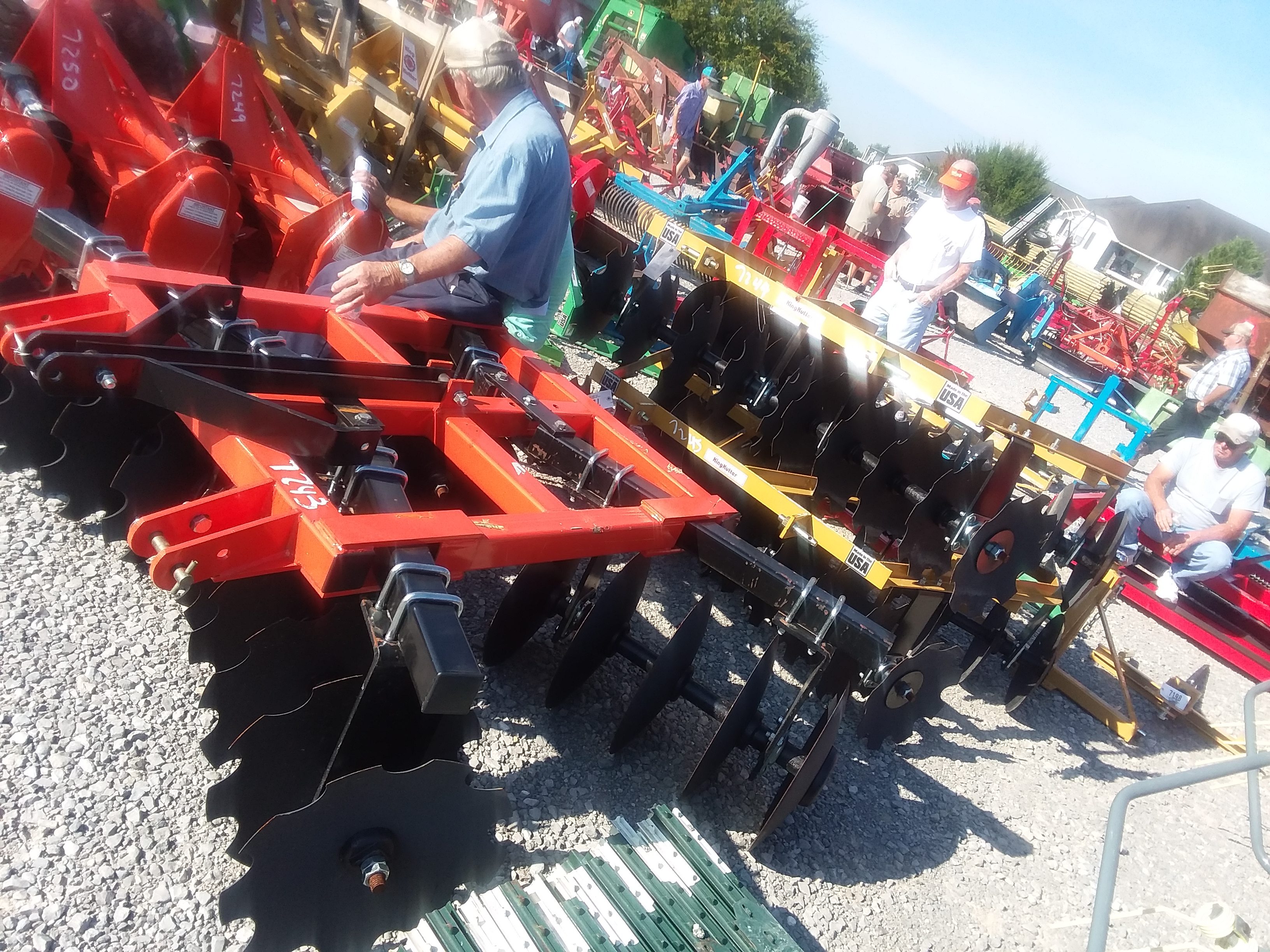 I found these disc harrows, all nice, but didn’t bid on the small one, because it’s just too light for what we need to do. I bid on the orange one in the second photo, but gave up around $600. It’s nice and it’s probably worth about $1,800 or so new, but I was looking for a deal.

The auctioneer only spends about 30 seconds on each item so you have to know how much you’re willing to spend before the bidding starts. It’s a good idea too, to ponder what happens if the bidding goes a little higher than you expected. 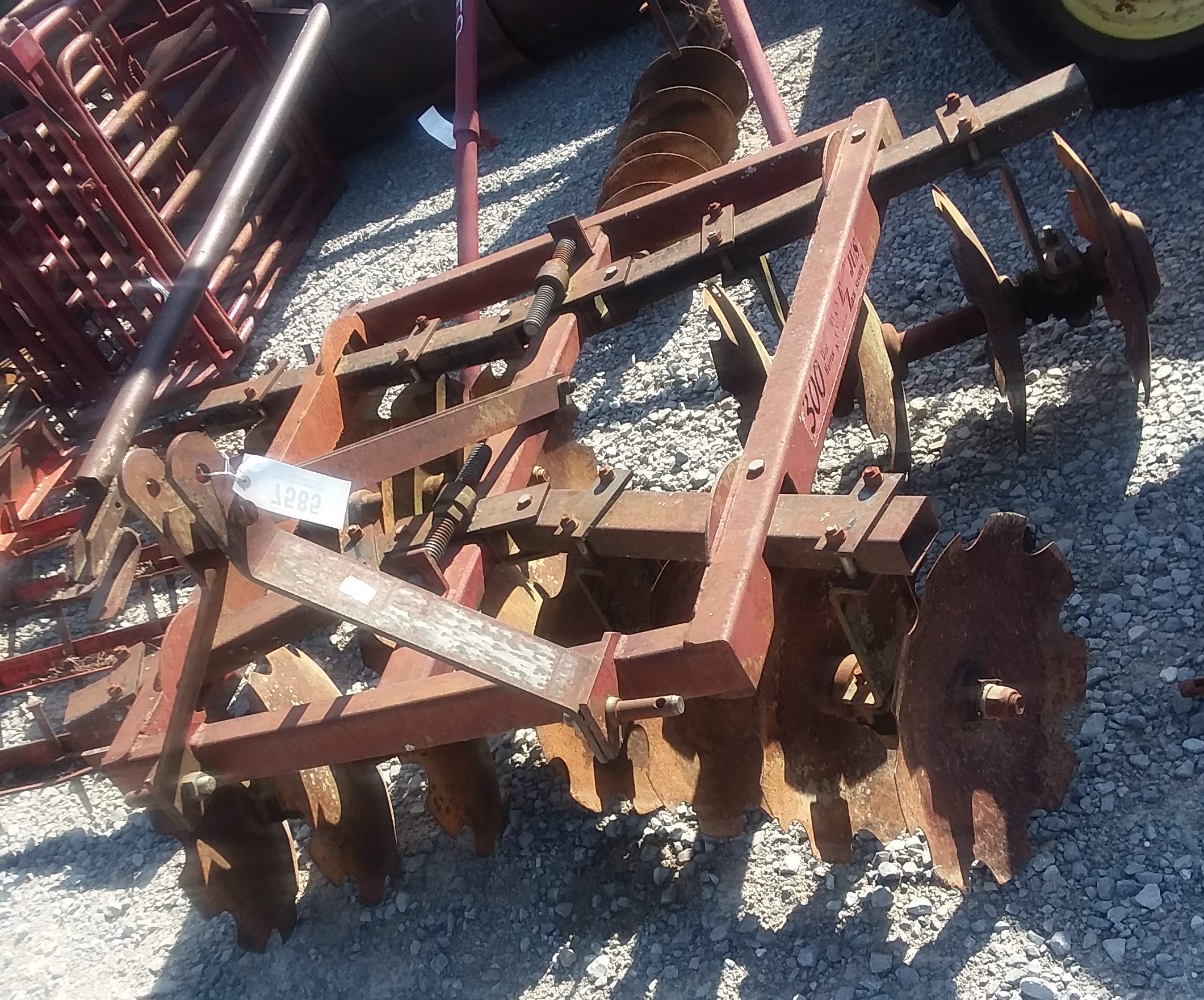 The 300 A.T.L.A.S disc harrow is old, but the discs spin easily and there is surprisingly little rust. I didn’t bid on some other nice, new disc harrows because I figured I could get this one cheap. I was wrong. This harrow was less than the new ones, but not by much. There were about 10 different bidders for this machine, so the price went up quickly. This was the last suitable harrow for my tractor, so I was pretty committed to bidding top dollar. 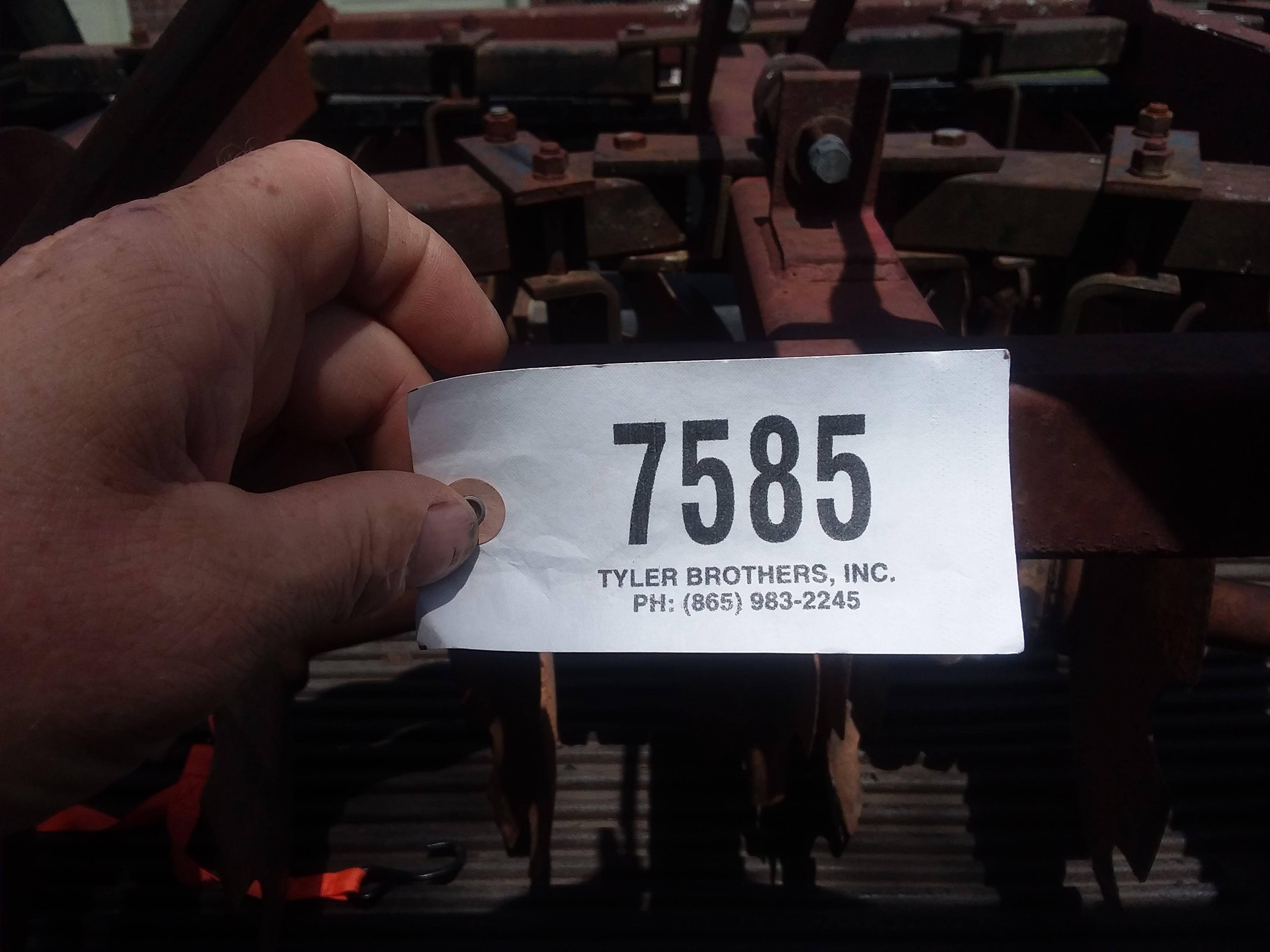 The auction tag identifies each piece of equipment. It is used to look up inventory in the auction catalog and ensure that the right gear leaves the auction with the right bidder.

I found this old 300 A.T.L.A.S harrow a couple of rows deep in the auction and I figured it was for me. It’s heavy duty but only about 5 1/2 feet wide. The discs are 16″ in diameter and they spin freely on their well-greased axels. This model has (what I thought) an easy to adjust crank on each axel, so I can change it depending on soil conditions.

It took about another hour for the auctioneer to get around to this piece so I walked around a little. There is a “small items” auction that goes on at the same time as the two equipment auctioneers are selling the bigger gear. I walked over to the back of the lot to see what they are selling just in time to see a new in the box 20′ by 30′ greenhouse kit get sold for $400… that’ll teach me to pay attention.

Anyway, I got back to the auction, bid on the A.T.L.A.S, and walked away with it for $650. That seems like a lot for an older model harrow, but it’s in great condition and is exactly the right size and style I was looking for. And if it doesn’t work out, I can always bring it back to TBFE and sell it off next auction. 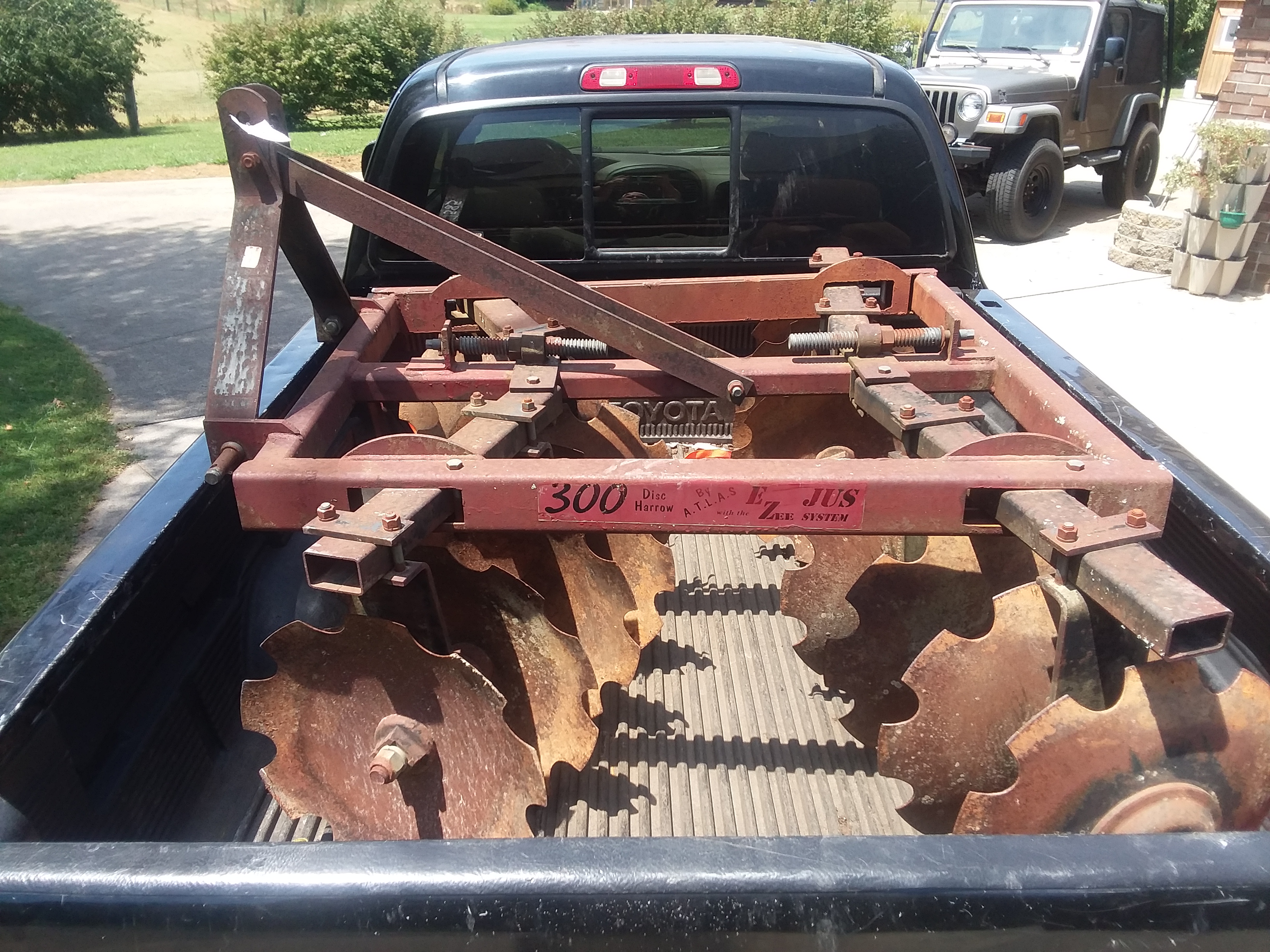 The folks at Tyler Brothers loaded the harrow into the back of the truck using a boom crane mounted on a tractor. The harrow fit perfectly so I didn’t even tie it down for the 10 mile drive home.

Here the Toyota Tundra with the disc harrow in the back. I had to run home for a check and my tax information before I could pick up my new toy. I drove home, paid for the harrow, (TBFE) loaded it up, and I was driving home in less than an hour. I got home a little after noon and was ready to work that afternoon. 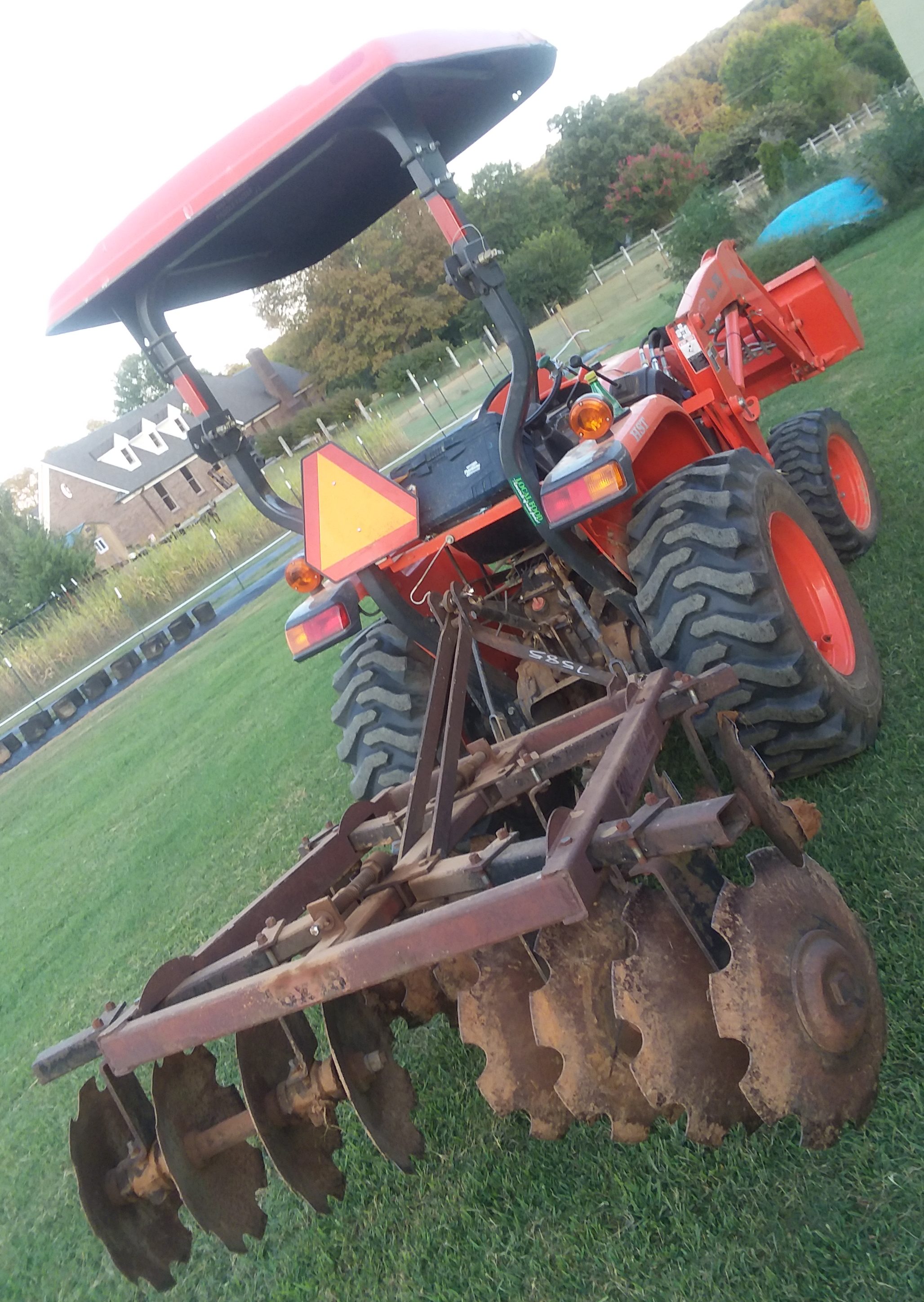 We bought the disc harrow to use with our Kubota L3800 tractor. It turned out to be a really good fit, and it’s pretty easy to attach to the 3-point hitch.

Here’s what the disc harrow looks like when it’s all hooked up to the Kubota L3800. It’s a great fit for the 38HP tractor. It’s heavy, but not too heavy, and the width matches the wheels of the tractor pretty closely.

I’ve been planning to build some more gardens for several months and this was a good opportunity to test the new Harrow. This is a 40′ by 100′ plot after I did about 5 laps with the new disc harrow.

Trying the Disc Harrow on a 4000 Square Foot Garden…

I spent about 3 hours on this new garden. The first thing I did was run the disc harrow over it to get a little immediate gratification. The harrow works really well on the grass and topsoil, but had some difficulty on the concrete-like clay and shale underneath. I swapped out the harrow for my home-made (by someone else) whale-bone-like subsoiler, and went to town on the clay with that thing for about an hour. It digs in anywhere from 12″ to 18″, whatever the tractor can muster. It dug up a lot of large and very solid chunks of clay. I swapped the subsoiler back for the disc harrow and spent about an hour driving back and forth on this new garden.

The harrow works really well, but I’ll have to hit this garden again several times, and plant some cover crops before it’s ready for planting.

I have to say I’m pretty happy with the A.T.L.A.S disc harrow. It’s a very stout piece of equipment and, once I sprayed some penetrating lubricant on the adjustment screws, it was pretty easy to configure the way I liked. I still have at least one more large garden to till this year so I’ll have enough space to plant everything in the spring. I’ll be working a lot of compost, nutrients, straw, and cover crops into these gardens before planting next year.

The soil is broken up at least as well as I could have done with the tiller. It didn’t compact everything under the top-most layer either, so I’ll be able to get nutrients a good 12″ to 18″ deep right away, and they’ll get plenty of air and water too.

I’m really optimistic the new disc harrow will help us with all of our crops this coming year.