Pick a spot and clear the topsoil… 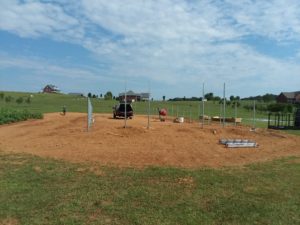 Drill postholes and set the posts… 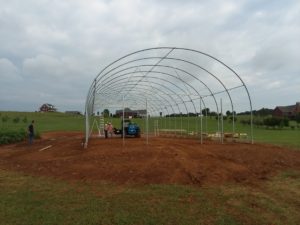 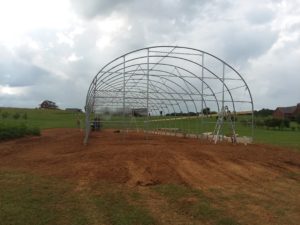 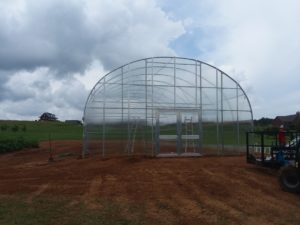 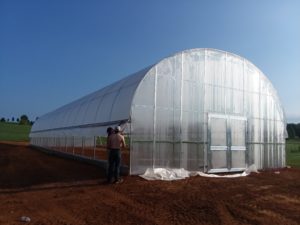 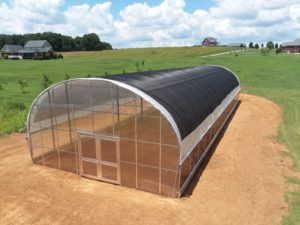 We Have a Greenhouse (but now we need water) 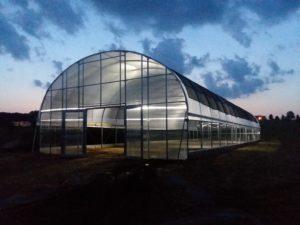 We have an unused well near the house that would be a good water supply for the greenhouse. The well has a lot of very clean that can be seen with a flashlight only about 20′ down from the surface… the only problem is that the well is about 300′ from the greenhouse. We decided to run a 3/4″ supply line and a 2″ drain line, each with 5 connections down the length of the greenhouse on the east side. The drain would extend another 50′ or so and get dumped into the grass while the supply line would go the 300′ to the well head.

This installation was somewhat problematic because 1) I am not a plumber, 2) It’s a LOT of work and 3) There were “issues” that arose during the install that will be described in the following… 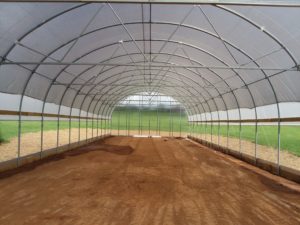 Here’s the greenhouse floor after the dirt has been leveled and smoothed out.

We have about 3000 square feet that will need a lot of water and drainage. Our plans are to install rows of pots that will be supplied with a drip irrigation system. We worked with Innovative Garden Supply in Rockford, TN and determined that a five-zone system would be suitable for our first year’s grow.

The water supply/drain lines will be installed on the east (right) side of the greenhouse. 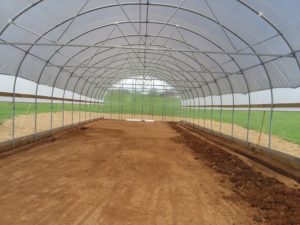 The trench has been dug and is about 18″ deep at the far end and 24″ deep where it exits the greenhouse at the near end. It was dug by hand because the trench is pretty close to the wall. Digging was fairly easy because half of the dirt was moved into place during site preparation. There was a section about 15′ long that was a pain to dig because there was a lot of 1″ to 3″ gravel in the ground.

Pipe to the Well 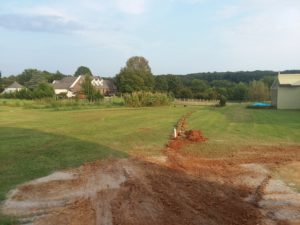 Looking south towards the well from the front of the greenhouse. You can see the drain line sticking up out of the ground. The 3/4″ supply line is in the same trench. 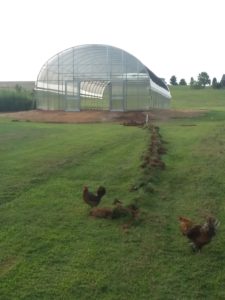 Looking north from about 100′ from the greenhouse you can see the trench that was started with a subsoiler and finished by hand with a trenching shovel. I was going to rent a trencher but the digging was fairly easy at this point so I decided to dig it myself (issue #1). It ended up taking about 3 days of intermittent digging to get the trench run, the pipe laid, and to make the hookup to the well.

I had to disconnect a lot of plumbing that was attached to the well, including a supply line to the house, one to a long-gone sprinkler system, and another to a well spigot… in the neighbors yard… about 200′ feet away.

The constant cycling of the well pump caused it to burn out after about a day and a half (issue #3). Now I had to replace the well pump. 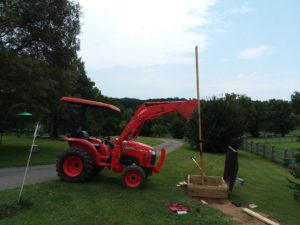 I used the bucket of the Kubota to pull the pipe, wire, and well pump up from a depth of over 220′. The old pipe was 2″ schedule 80, 20′ pipe with threaded metal connectors that weighed a ton. It took half a day to put it to the surface and take the pump off. The pump was a 3 HP, 17 A monster(!).

After studying the differences between 2-wire and 3-wire well pumps and watching several Youtube videos about wells and pumps, I went out and bought a replacement (2-wire, 1 HP Eco-Flo).

I found out that the internal check valve on these pumps doesn’t work very well.

I also bought a brass check valve to attach to the top of the pump. I also got…

It took most of the next day to install the check valve, install the torque arrestor, wire the pump, connect the pipes, lower the whole thing down the well one pipe section at a time, installing the new well cap, and hooking up the new pressure switch.

I turned the power on and I found I was right back in the same place I was in with the previous pump… the power cycled on and off about once a second (issue #4). I shut the power off and went back to the Internet.

My well cover only has about one foot of clearance and there isn’t a whole lot of room under the lid where I could put a pressure tank. I discovered that there is a thing as a 2 gallon Well-x-trol pressure tank that would fit in my well “house”, and Lowe’s has them in stock. I went to Lowe’s and bought one.

It took a while to dig out around the already-installed plumbing so I could rearrange the PVC pipe to where I could accommodate the pressure tank, the pressure gauge, the pressure switch, a main valve, and hook up to the 3/4″ supply line. 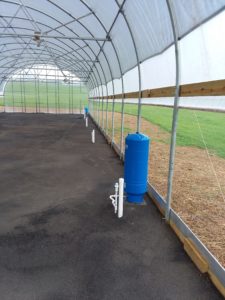 (Remember, I’m not a plumber… not even close) I installed a pressure tank (the previous owners of our home left a spare) in the greenhouse. It’s about 300′ from the well/pump so it didn’t work very well with the pressure switch in the well-house. 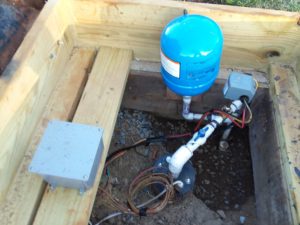 Note also: I am not an electrician. I finally managed to wire and plumb the well and greenhouse so there is more than adequate water for our first years grow. 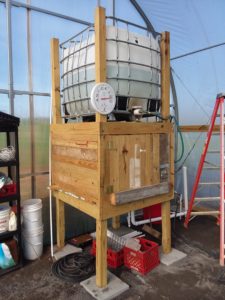 This is a water tower that we built from a (roughly) 300 gallon Intermediate Bulk Container (IBC). We use this to fill spray bottles and other small containers that need water… because it’s handy. It can also be used to supply the irrigation system … for about one day.